PSYCHOLOGY
The Devolution of Individual Identity with Conformity
Hannah Vermeij

The concept of conformity refers to the psychology behind changing an individual's feelings, beliefs, or opinions to fit in with a larger group (Levine, 2020). Conformity can often become serious – for example, in instances of deindividualization and mob mentality. Experiments like Asch's Conformity Experiment and the Milgram Experiment, alongside others, have greatly increased our understanding of conformity and its effect on individualism.

Conformity is something that most people do at some point in their lives in order to fit in, be part of a group, or not draw attention to themselves as having differing views. The concept of conformity refers to the psychology behind changing an individual's feelings, beliefs, or opinions to fit in with a larger group (Levine, 2020). There are times in life when people are more likely to harmlessly conform, such as in high school when a teen may agree with liking a musical group that their friends like rather than debate why they do not really like the band. There are, however, instances when conformity can become more serious, when one loses their individuality within large groups and a mob mentality takes over. The actions of the group can deteriorate into large-scale destruction and violence and each conforming individual involved becomes a danger to society.

Many factors play a key role in conformity. These include group size and alignment with the majority, respect for authority, deindividualization, fear, and even mob mentality. Conformity and the loss of individuality can stop each person within a group from taking responsibility for their actions and replace part of their identity, for the moment, with that of the group which results in uncharacteristic behavior and even violence. Conformity with the majority is often easier to do than retaining individuality, especially in larger groups. Various experiments illustrate this phenomenon.

A psychological experiment that perfectly illustrates this is Asch's Conformity Experiment created by Soloman Asch in 1951. All data and theory for this section, unless cited otherwise, are taken from McLeod (2018) as the paper is dedicated to a detailed discussion of this experiment and Asch’s further conformity experiments. In Asch’s initial experiment, he brought in directed participants and one subject per trial. He had the subject match the height of one line to a choice of three lines on the opposite side but only one line was a clear match (Figure 1). However, the subject was placed in between the participants who were instructed to identify an incorrect line as the answer. The test was to see whether or not the subject would conform to what the other participants said rather than going with the answer they knew was correct. The subjects went along with the participants 37% of the time instead of providing their own answers that they thought to be true. When asked why the answers varied. Some subjects said that since the majority had opposing answers, they thought the other participants must be correct and they were wrong. While others said that they did not wish to go through the discomfort of disagreeing with others (HeroicImaginationTV, 2012). Asch wanted to further explore whether the size of the group would affect conformity and adjusted his experiment to include various numbers of participants. When only one participant was in the room with the subject, the other participant had almost no impact on conformity and when two participants were in the room, conformity barely raised at all. With three or more participants in the room, conformity became way more apparent (HeroicImaginationTV, 2012). However, group size only creates more conformity if everyone unanimously agrees. Asch conducted another variation of his experiments where one other person was added to this experiment with the correct response of which line was matching in height. The percent of conformity dropped from 37%-5% when another person supported the subject’s correct answer, which found unanimity to be exceptionally important for group conformity (HeroicImaginationTV, 2012). This experiment perfectly displays why people conform but what reasons affect how much people conform? 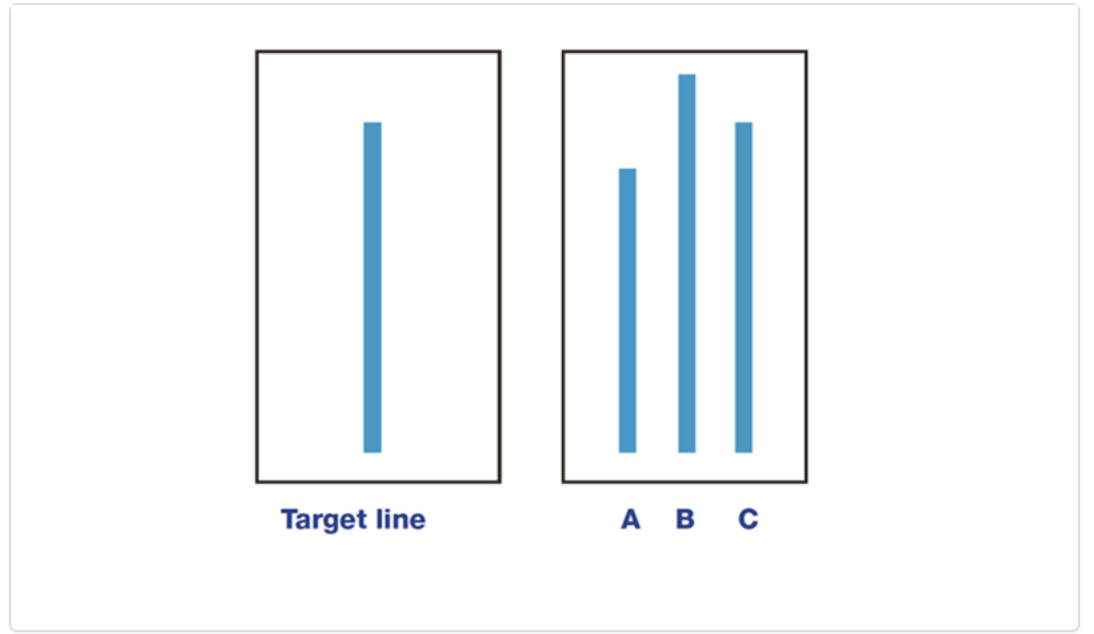 A component of how much someone conforms is the authority and admiration they have for others in the group to which they are conforming. The more someone looks up to and admires the leader of a group or a group of people, the more likely they are to comply and conform to their ideas and beliefs. The Milgram Experiment is one example of when subjects listened to and blindly followed those believed to be educated authorities leading the study rather than think for themselves and do what they think is right. The experiment was conducted by Stanley Milgram in the 1961, wherein scientists told the subject to increasingly give high voltage shocks to a person on the other side of the wall. The subjects were told that the person they could not see was doing a memory experiment and they had to shock them when they got an answer wrong and increase the shock each time to improve their learning for a memory experiment. Although the person on the other side of the wall was not actually shocked, the screams could be heard by the subject. The experimenter, dressed in a lab coat to give the perception of authority, told the subject that it was essential for the experiment that they continue and deliver each shock. In the end, 65% of participants continued to the highest level of shock which could have killed a human (Jhangiani et al., 2022). This showed that people are likely to do what someone of higher expertise and authority, such as a doctor, tells them to do because they believe they know more about the topic and are trustworthy. However, this can become dangerous by agreeing blindly with someone we admire and assuming they know the answers.

The Tug of War

For one experiment participants were blindfolded and were told that they are playing tug of war. First, the subject was told they were on a team by themselves and then measured how strongly they pulled. Then they told the subject that they were on a team with other people and measured how strongly they pulled when told they are not alone. The experiment displays that when not held singularly responsible, the subjects would act differently in a group and not pull as strongly compared to when they were alone (Ingham et al., 2004). In this experiment, the subject did less work in a group whereas, in the following Hallowe’en Candy Experiment, the subjects stole.

During the experiment, children in Hallowe’en costumes were out trick or treating. At the house of this experiment, the children rang the doorbell and an adult came to the door. Some children were asked their names while others remained anonymous. The children were told to only take one candy and then the adult briefly left them alone, allowing them the opportunity to possibly take more candies. The study found that children who came alone or gave their names were more likely to take only one candy as compared to the children in a group or who remained anonymous. These children tended to take more candies because they thought they could get away with it without repercussions (Atkinson et al, 1987, p.601).

Deindividualization and lack of individual responsibility are key components of conformity. Conformity is seen hundreds of times every day but when is it that it gets dangerous?

Possibly one of the worst and most dangerous reasons for conformity is fear. When put in a scenario where someone is scared to disagree or have opposing opinions, conformity is usually more likely. An example of this is the Salem Witch Trials in Massachusetts from 1692-93. During the trials, it became common for citizens to point their fingers at other citizens in order to escape being deemed a witch themselves (Jen, 2014). They conformed to other people's beliefs and systems of finding “guilty people” out of fear and in order to save themselves. Although religion played a big role in the Salem Witch Trial, conformity due to fear is still very visible today and is never acceptable.

Mob mentality is one form of conformity that can be dangerous when the situation presents itself. Mob mentality, also known as a herd, group, pack, or crowd mentality, is when a group of people start to do things as a group that they would not normally do on their own. Mob mentality is affected by people conforming to what others are doing and the feeling of not being held responsible when in a large group (WebMd, 2021). This is where conformity becomes dangerous when some nonviolent people commit crimes. The main reasons they commit these crimes are because they conform to what other people in the group are doing and due to deindividualization, do not feel responsible for their actions. There is no limit to what behaviors can be carried out as seen during riots, the January 6th Insurrection in Washington, and the Russian soldiers’ war crimes in Ukraine.

The Importance of Conformity Research:

Understanding why normally law-abiding people partake in violent and extreme acts while in a large group or mob due to deindividualization and conformity allow us to get a better grasp on how to prevent it and quickly shut down groups that are using this to their advantage in high-pressure situations which can become dangerous. Additionally, knowing one's own actions and why one might act uncharacteristically in certain situations might allow them to take the needed second to ask themself why they are doing what they are doing and try to prevent themself before anything extreme happens. In summary, it allows us to get a better understanding of human minds and the causes behind certain phenomena such as conformity and mob mentality so we can prepare, prevent and become more informed about human behavior.

Conformity is affected by so many things such as group size, authority and admiration toward the group, the strength of the common belief, and personal safety. However, conformity can become dangerous in the wrong circumstances. This is mostly due to not feeling responsible for the events taking place and taking on the mentality of the group rather than their individual beliefs. Reflecting on the Milgram Experiment and Salem Witch Trials, most people are confident that they would not have conformed and taken part. However, conformity does seem to be based on the situation at the time and dependent on deindividualization. Conformity leading to mob mentality can be seen so many times throughout history - from riots to violent mobs, even to war scenarios. There is a fine line between safe and unsafe and these events can make some very safe and cautious people, who are aware of right and wrong, do some things that are blatantly wrong while conforming in a group.

Kirby, S. (2022, April 11). What is Deindividuation and What is the Danger? BetterHelp.
Retrieved April 16, 2022. Available at: https://www.betterhelp.com/advice/general/what-is-deindividuation-and-what-is-the-danger/