The present study explores the effects on economic growth and prosperity that the implementation of Keynesian macroeconomic principles brought to Great Britain. Using historical records and authorities, the all-around effects of Keynesian principles on economic growth were determined along with their effects on the economy of GB1 in terms of recovering from the great recessions. As Keynesian principles rely on monetary efforts implemented by the government, many long-term sacrifices have to be made in order to benefit the economy, typically in the form of an increase in the national debt and inflation rates; after analyzing the state of prosperity in both the post and pre-Keynesian british economies, a clear increase in productivity is seen after the implementation of said Keynesian principles (alongside a clear increase in inflation rates). Through the use of quantitative easing, artificial consumer supplementation, and the development of fiscal policies, Great Britain was able to make a full recovery from the great recessions primarily due to the implementation of Keynesian macroeconomic principles.

Great Britain's implementations of the revolutionary Keynesian principles stood as the most impactful economic reform effort to accomplish a full recovery from the post-war economic recession.

World War I was one of the numerous significant factors that brought the economic expansion of the nineteenth century to an end, producing the imbalance that led to the Great Depression. Britain, the workshop of the prewar world, was exhausted by the struggle of withholding the immediate manufacturing demands of Europe. Moreover, the rising economic powerhouse, America, was unwilling to occupy the increasingly pertinent niche available to it from the global economic outlook (Temin, 2010). There was an increasing certainty that economic reform was needed to halt the expansion of the ever-growing imbalance in the economies of industrial nations worldwide. During the Great Depression of the 1930s, existing economic theories were unable to explain the causes of the severe worldwide economic collapse or to provide an adequately implementable public policy solution to jump-start production and employment (Jahan et al., 2014).

Economic theories that led to the rapid industrialization and dominance of western Industries heavily relied on the self-government of the enforced free market and assumed full employment alongside factors such as price stability would naturally implement in regards to the aggregate supply and demands of the population. The economic recessions that followed post-war negated these assumptions. Hence, the economic thinking of John Maynard Keynes regarding government intervention to stabilize the market was implemented, revolutionizing economic thinking and disassociating with the presumed liquidity of the free market. Keyne’s theory predominantly revolves around the importance of aggregate demand, which he asserted was the main incentive of an economy (Jahan et al., 2014). The fundamental basis of Keynesian economic beliefs is that the artificial supplementation of money into the consumer markets of a growing economy can help maintain continuous economic growth; it is essential to explore the extent to which the implementation of Keynesian principles affected GB’s economic growth to comprehend the contrast between post and pre-Keynes Britain fully.

In implementations of Keynesian Macroeconomic principles, advanced economies showed signs of short-term recovery in exchange for long-term secular stagnation6. After the artificial introduction of consumer spending benefits, the immediate impetus was a decrease in the pace of recovery as attention quickly shifted to broader and more long-lived issues, typically domestic. The advanced countries displayed slow long-term GDP and productivity growth potential (Fernald et al., 2017) along with a meager natural rate of interest (Laubach & Williams, 2003). These post-crisis conditions were, in fact, continuations of ongoing trends (Eichengreen, 2020). Declines in output and productivity growth occurred directly after the enhanced pace of short-term GDP and consumer market growth via the implementation of Keynesian principles, thus solidifying the short-term benefits of Keynesian principles while bringing light to the deficiency in long-term benefit provision. Secular stagnation is a classic Keynesian trope. In ‘Economic possibilities for our grandchildren (1931), Keynes augmented whether consumption would keep pace with productivity (Eichengreen, 2020). In the 1939 American Economic Association presidential address, Alvin Hansen7 suggested that spending depended on population growth and the size of the consumer market, which enhanced the complexity of implementing Keynes’ principles, which took into account primarily the consumption potential rather than the population growth potential of the market. Lawrence Summers8 portrayed in a series of speeches and presentations (2014) the parallels between Alvin Hansen’s suggestion and the incorporated enhancements in neo-Keynesian economic ideologies that took into account population growth and the consumption potential of the general consumer market population (Eichengreen, 2020). Ultimately, implementing Keynesian macroeconomic principles generally leads to short-term rapid productivity growth in advanced economies while maintaining an eventual downward trend into lower growth rates due to secular stagnation.

As Charles Kindleberger (1973) recounted, the sterling’s position rested on three primary factors: its superior credibility emanated from it having maintained its peacetime value against gold since 1717, which made it the preferred reserve currency of the global economic system; London’s position as the foremost hub of the international payments system, with trade balances typically being resolved by transfer between bank balances harbored in London; and Britain’s position as the world’s primary foreign lender, both short and long. Ultimately, Britain had stabilized the prewar monetary system in three particulars: maintaining a policy of unrestrained imports, providing counter-cyclical9 long-term lending, and discounting in crisis. After the war, the system was yielded unstable due to the inability of the British and the Unwillingness of the US (Skidelsky, 2016).

Keynes advocated the purchase of government securities in order to prevent a downward trend in the economy through the form of quantitative easing10. During further ideological reforms made to his policies, his beliefs incorporated that monetary policy alone was insufficient to stimulate an economy (Skidelsky, 2016.); due to the British State involuntarily experiencing significant growth during and after the war, both in expenditures and general size. Nevertheless, no compromises in social provisions were made in response to the increased state expenditure that was occurring in Britain at the time. After the war, government spending was cut, but state spending in the 1920s was double its prewar level; this signified that the government’s fiscal operations had a larger impact on the economy, for better or worse. Although government budgets were potentially usable for stimulating the economy as advised by Keynes, the British government persisted in their firm beliefs that there should be a balance; the balance including a sum adhered towards repaying the national debt, which claimed over 30 percent of the federal budget due to additional swelling from the war, and which was not in an ideal scenario to further grow in exchange for economic growth. Disciples of the balanced budget believed that only by confronting advocates of new expenditure (advocates such as Keynes himself) with the need to raise money from surcharges could there be a check on the inexorable growth of the state. The ‘balanced budget’ symbolized a return to normalcy, away from the collapsing primitive gold standard (Skidelsky, 2016).

Under intense pressure to cut taxes while simultaneously balancing the budget, the 10 The purchase of bonds in order to lower interest rates on savings and loans. Government in 1921 appointed Sir Eric Geddes as head of a committee to gather savings of up to £87 million. In what became known as the ‘Geddes Axe,’ government spending was cut by 25 percent due to state spending being equivalent to approximately £100 Billion in today’s sterling exchange rate, thereby undermining an already fragile economy. Baldwin, the new chancellor of Britain, commented that ‘money taken for government purposes is money taken away from trade, and borrowing will thus tend to depress trade and increase unemployment’ in defence of the ‘Geddes Axe,’ (Middlemas & Barnes 1969.). The budget balance was restored in 1922–1923. Furthermore, contrary to the motives behind the ‘Geddes Axe’ cuts in government spending actually increased the national debt from 135 percent of GDP in 1919 to 180 percent in 1923 (Skidelsky, 2016). Although the economy was able to bounce back after a year, full employment was unfortunately never achieved during the 1920’s.

The implementation of Keynesian principles

During the run-up to the General Election of 1929, Liberal leader Lloyd George promised that a newly established Liberal government would borrow £250 million for a two-year agenda for infrastructural development to get rid of ‘abnormal unemployment,’ as anointed by him, at the time of his proposal the conservatives maintained authority. The figure he suggested was approximately five percent of the British GDP in 1921. Keynes and fellow-economist Hubert Henderson wrote an enthusiastic endorsement, ‘Can Lloyd George Do It?’ They argued that the introduction of extra state spending would mark the beginning of a ‘cumulative wave of prosperity’. The Chancellor at the time, Winston Churchill, believed the Keynesian Lloyd George proposals were especially opportune. In 1931 subsequent research has suggested that between 650 000 and 865 000 jobs were created of the 1.25 million insured British workers after the implementation of the Keynesian Lloyed George proposals, enough to have had a big impact on unemployment and to mitigate the impact of the world depression that struck in 1931 (Middleton, 1985). There was another economic collapse in 1937–1938, the response to which was a huge loan-financed rearmament programme evidently incorporating Keynesian macroeconomics principles and beliefs, which finally lifted Britain out of semi-recession ten years after the start of the Great Depression (Middleton, 1985). 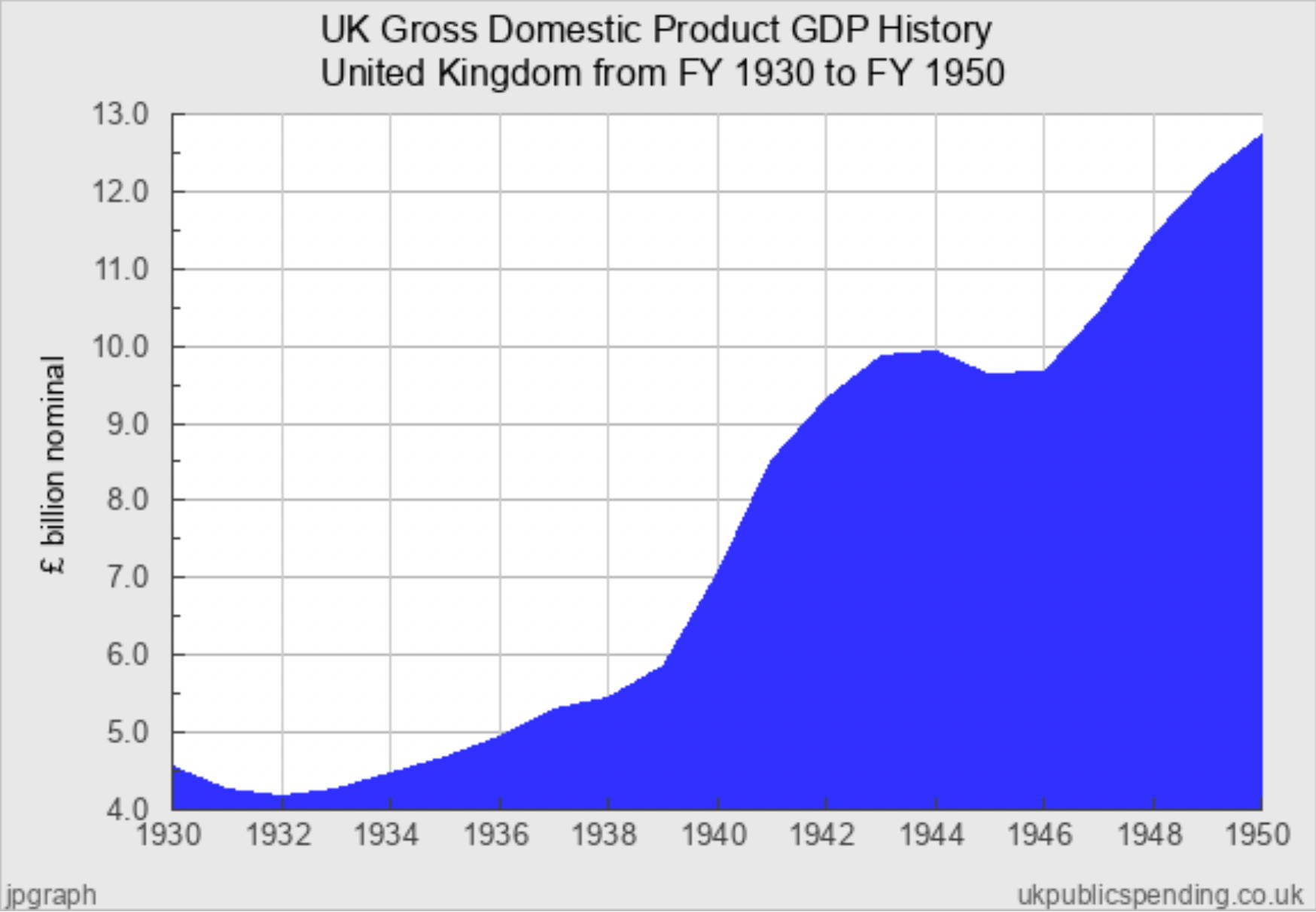 The true incorporation of Keynesian macroeconomic principles into the authority of GB occurred during the late 1930s, which is when the respective GDP reached growth rates high enough to lift Britain from the depression, thanks to implementing the revolutionary principles of Keynes and his adherents. 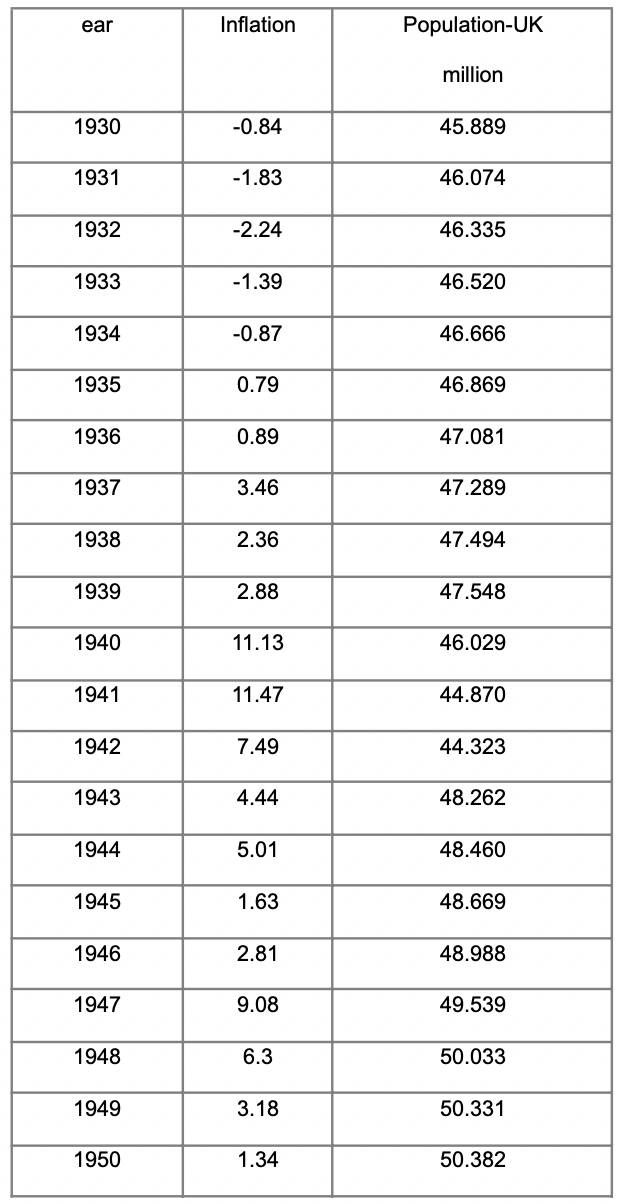 Economic growth from the economy of Great Britain did not come without sacrifices, however. GDP and economic growth rates were at all-time highs but not without seeing peak inflation rates, due to the sacrifices necessary in the implementation of Keynesian principles; resulting in worse trends for the long-term future of the British Economy. Nevertheless, as John Maynard Keynes said himself, “In the long run we are all dead.” (1923).

The implementations of the revolutionary Keynesian principles stood as the most impactful economic reform effort on GB12 for the accomplishment of a full recovery from the post-war economic recession. The Keynesian principles promoted monetary sacrifices made by the government in order to promote continuos prosperity in the economy, these monetary efforts were made throught the means of quantitative easing, fiscal policies, and artificial consumer market injection. Furthermore, John Maynard Keynes and his principles had great affects on the prosperity of the british economy, after their fundamental implementation during the late 1930s, the implementation of said principles lead to an increase in the employment rate of GB, creating a little under a million new jobs and boosting the economy to new heights, maintaining GB as a great national lender once more. Evidently, the economic growth rate of GB was far higher after the implementation of keynesian principles, however, as the economy’s growth rate grew due to the said keynesian policies being applied, so did the rate of inflation and national debt; this was a well known side affect of Keynes’ principles and one that was worth taking in order to provide jobs for the millions of British citizens and raise GB out of the global Recession. In closing, the implementation of Keynesian Macroeconomic principles into the economy of Great Britain was the primary reform that lead to the recovery of GB from the great recession and depressions.