Given that the first artificial navigation system was proposed less than a century ago (1956), the presence of a natural compass in species so old seems rather intriguing. The current quantum hypothesis to explain avian migration utilises a photosensitive pigment called cryptochrome which is responsive to very small changes in the geomagnetic field. This theory is based on the fluctuations of various entangled pairs as singlets and triplets, leading to some specific reactions which govern the bird’s flight trajectory. This natural compass is also unique in that it is not impaired by anomalous magnetic polarity readings due to artificial magnets. While ultimately there is an alternate perspective that suggests a more chemical based approach, the entanglement theory seems clearer at this point as analysed in this paper. In this research we explore the respective hypotheses presented by Henrik Morrison, and Schulten & Ritz. The Radical Spin model proposed by Schulten and Ritz forms the basis of the hypothesis as it suggests a correlation between the radical states and the production of certain proteins which might be the ultimate source of electrochemical signals that operate the bird during its flight time. Further, a corresponding idea of magnetovision is also proposed which highlights the possibility of explicit vision of the field to specific bird species.

Various theories have been developed to explain the phenomenon of magnetoreception in migratory avian species, particularly the European Robin (Paul Kerlinger, 2008). The quantum perspective however stands out because it suggests a possible link between teleportation, an idea that was once purely fictional, being integrated in the concepts of entanglement to explain the formation of singlet-triplet pairs (Kai et al., 2020). With the latest advancements in this theory, it has become apparent that by implementing the fundamentals of quantum mechanics in nature (in this case, the Robin), we might be able to develop simulations of various quantum based applications artificially too (Ryszard et al., 2009).

A recent experiment conducted by biologist Henrik Morrison (2018) used behavioural observations on a European Robin which was released in an artificial space with a manually controlled gravitational field and lined with a scratch sensitive paper. The Robin’s responses (in terms of the mean direction of motion) to specific changes in the field were recorded, after which, an opaque mask was used to cover one of her eyes. The same readings were then repeated with the mask. The entire process was then repeated after covering the other eye. Throughout the experiment, the robin’s behavior was only observed under different circumstances, not induced or manipulated. At any point of noticeable discomfort, all variables were returned to normals to ensure safety of the bird.

All Figures and tables used for explaining relevant concepts were developed by the author of this paper using information from relevant academic sources, which have been cited in the reference list.

When the Robin was set free under normal conditions, it was observed that she typically moved in the ideal direction of the migratory path with respect to the field’s set up. However, upon the introduction of visual obstruction, the antagonistic part of her brain shut down and showed signs of impairment in terms of magnetoreception.

In the recent studies conducted by biologist Henrik Morrison (2018), the behavioural changes in a European Robin were observed to identify any correlation between its visual senses and magnetoreception. It was seen that its sense of geomagnetic fields was impaired when either one of its eyes were covered with an opaque mask.

Initially, the idea of magnetoreception in migratory birds was supported by two distinct theories, one dealing with chemically triggered chain reactions among protein molecules while the other proposed a quantum perspective (Sönke et al., 2005). While both hypothesis involve a receptor called cryptochrome (Cry4), the biochemical perspective introduces another molecule, namely iodopsin (Haijia et al., 2020). However, the limitations posed by iodopsin’s lack of responsiveness to changes in light makes this hypothesis seem unclear at this point (Haijia et al., 2020). Thus, this paper will be analysing the theory based on quantum entanglement to express the magnetoreception-based navigation system in migratory birds.

As the bird uses its eyes to see, the visual input recorded is replicated twice (Ortega, 2005). While one set is used for social aspects of her life (such as finding food, nourishing eggs, or finding mates), the other set is utilised for magnetoreception inside a complex quantum based mechanism (Ortega, 2005). According to this theory, the transduction pathway created between Cry4 and the entangled photons is constructed alongside 6 distinct genes GNAT2, LWS (iodopsin), GNG10, KCNV2, RBP and RGR (Qin et al., 2016).

As a consequence of these chain reactions Cry4-FADH is released and the concentration of Cry4-FAD in the retina’s photoreceptor cells is diluted resulting in the imbalance of the current equilibrium and creating a new one. This feedback loop drives a continuous stream of electrochemical signals which dominate the ongoing wing movement patterns and create a new one for the bird to turn (Qin et al., 2016).

However, if these reactions were to stay dependent on the geomagnetic fields only, then Morrison’s masked bird experiment would have to be a paradox. To understand the correlation between light and magnetoreception, we will refer to Schulten and Ritz’s Radical Pair Model (2000). This theory suggests that upon their interaction with light, the cryptochrome molecules exhibit an excited behaviour. This, along with the energy from the photons, induces the formation of a donor-receiver pair as a single electron is transferred between the paired molecules. These molecules are then considered to be an entangled pair. Such pairs can broadly exist in two forms: singlets and triplets (Ritz et al., 2000). Based on the concentrations of each of these pairs in the brain, corresponding molecules (Cry4-FAD and Cry4-FADH) are produced. Possibly, these molecules govern a certain state (active=1 or passive=0). If the state is active, it assures the bird that the opted path is correct, else it prompts her to change direction. 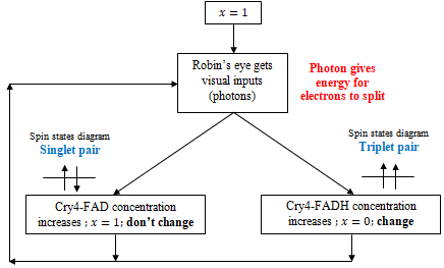 Figure 1 depicts the key flow in the concentration changes of Cry4-FAD and Cry4-FADH as triggered by the ratio of singlet-triplet pairs in the quantum entangled photons.

Furthermore, it seems that the geomagnetic polarity does not influence the direction of motion of the Robin. Unlike a compass, the production or breakdown of Cry4-FADH and Cry4-FAD is sensitive only to the direction of the field lines (regardless of their respective polarities) as demonstrated in Table 1.

Table 1: Effect of polarity and magnetic field line direction on the mean trajectory of migratory flight

Another attribute which must be considered is the threshold of the magnetic field for it to be recognised by the bird. The average strength of the geomagnetic field corresponds to with the overall range being (Ritz et al., 2000). When the Robin was exposed to fields beyond both extremes, its direction recognition was largely impaired. While this response to the lower values might be expected, the precise reasons for the Robin’s lack of responsiveness were initially counter-intuitive. Further experimentation showed that the Robin took about 17 hours to adapt to and about 1 hour to adapt to (as shown in Table 2). This also confirmed that the polarity of a specific direction did not influence the bird’s quantum navigation system and that the direction and strength of the geomagnetic field lines is solely what mattered.

Fig 2 highlights the effect of the magnetic field line directions on the path taken by the Robin. Note that represents the ‘normal’ state while represents the ‘inverted’ state. 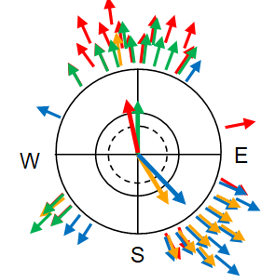 Figure 2: Mean direction of the flight path of the Robin as per the changes in polarity and field line direction 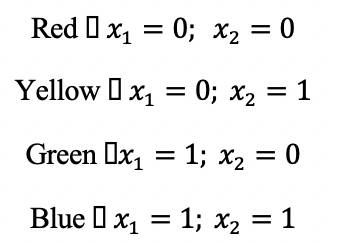 Moreover, the arrows on the circumference of the circle represent the direction opted by every individual bird with the corresponding color-coded attributes ( and ). The mean direction is therefore calculated and is represented in the inner sectors as the longer arrows.

Additionally, for the quantum hypothesis to work, a bird’s general trajectory for migration must be defined in terms of the surrounding magnetic field line patterns (Qin et al., 2016). This theory projects two main ideas. The first proposal deals with a certain mathematical relationship between the defined path and the geomagnetic field (Ritz et al., 2000). Figure 3 addresses the first possibility through a simple example wherein the trajectory matches the field line patterns exactly. 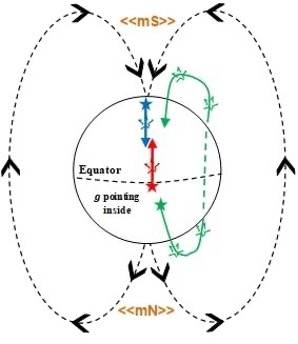 Figure 3: Possible reaction in the Robin’s behavior at different points on the Globe

Figure 3 aims to illustrate a possible response of a migratory bird using Cry4 and quantum entanglement for magnetoreception. In this, the star represents the bird while the arrows determine the proposed path of migration. The poles are represented by <<mS>> (magnetic south) and <<mN>> (magnetic north) and represents the force of gravity.

The second proposal appears more bizarre as it suggests the visual appearance of the geomagnetic fields for the birds (Al-Khalili, 2018). However, due to the complexities involved in the recognition of the nature of entangled pairs, the quantum aspect of navigation is yet to be thoroughly understood and remains a big challenge.

While avian magnetoreception is typically analysed from two different perspectives (chemical and quantum), it seems that given all observations so far, including the effect of light, polarity and field line directions, the quantum model seems more apt. Further, the correlation between the concentrations of Cry4-FAD, Cry4-FADH and singlet-triplet pairs was also analysed to understand the relationship between entanglement patterns and chemical production in the brain and how the fluctuations in the quantum states affect the electrochemical signals sent to the bird.

This concept of quantum based magnetoreception contributes a great deal in our understanding of how biological molecules have evolved and adapted to magneto-sensitivity. It also proposes a new approach to magnetovision supported by the fundamental idea of singlet and triplet pair fluctuations. However, as the experiment conducted in the European Robin specifically tests the relation of Cryptochrome in that species, it is still unclear if the relation between Cry4 and quantum magnetoreception can be generalised to all avian migratory species.

Regardless, it is certain that the emergence of biology with quantum physics can certainly explain some of the most bizarre phenomena in this field.